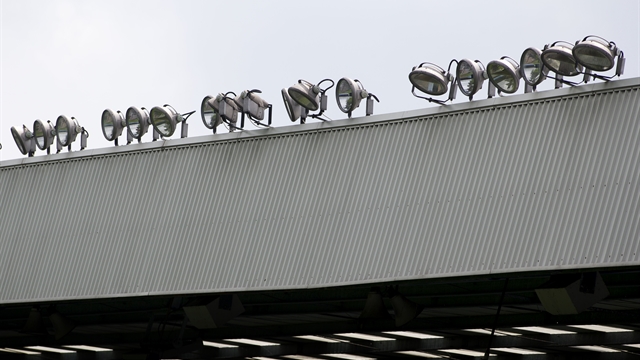 The Premier League revised the requirements for floodlighting at all Premier League clubs to be completed for the start of the 2014/2015 season. The revisions included changes to the illumination levels, area of coverage and changes to the lighting technology to provide flicker free lighting. The floodlighting at Villa Park was circa 15 years old and nearing the end of it’s lifespan hence, Villa decided to replace the whole of the lighting installation.

Phillips lighting produced the detailed lighting scheme including floodlighting to all four stands, which has never been provided at Villa Park with previous schemes.

The existing floodlighting control rooms overheated due to a requirement for them to be fire rated enclosures. As part of the works natural ventilation systems were installed to assist in the temperature control of the control rooms.

The floodlighting controls were integrated into the existing site wide BMS system which enables the stadium managers to operate the floodlighting system from their mobile devices.

During the works the existing sodium discharge house lighting was replaced with modern high bay LED lights to reduce maintenance costs and improve the energy efficiency of the stadium.

Halligan Consulting Engineers were appointed by Persimmon Homes to provide Mechanical and Electrical Services for a new cricket pavilion as part of their new housing development in Selly Oak, Birmingham